Joined Jan 10, 2013
·
240 Posts
What's your worst breakdown story? My happened about this time last year when I was riding north to attend the Pewter Run. Three major failures in just 200 miles of riding. Makes for a good story though...

Check it out: Bad Luck Comes In Threes: Brakes, Belts and Drums 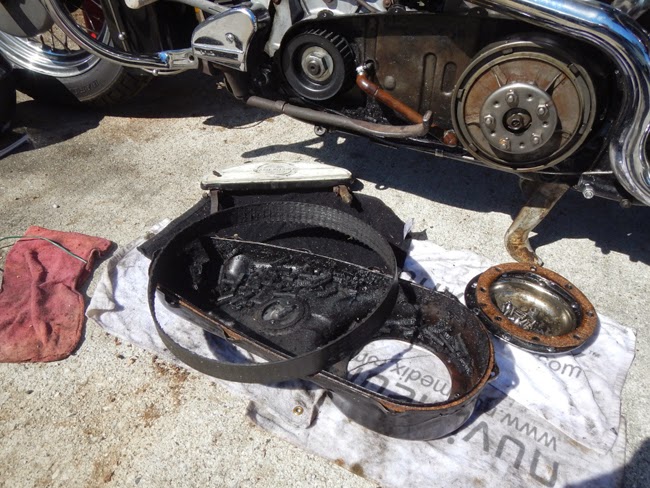 Decided to ride the bobber to work yesterday even though it's not at 100% yet. I ride a very curvy, fun road to work everyday. I was cruising along and as soon as I started coming up to one of the nasty blind curves, my throttle cable snaps and I lose all ability to move forward. There was no shoulder so I pulled off to the side as far as I could go but I was in the middle of the blind curve so I had to quickly push it uphill and around the curve to where it was safer. Spent an hour disassembling the throttle cable assembly on the side of the road to see if I could rig it enough to just get me to work. Then the people in the house in front of me came out and started yelling, insulting and swearing at me because they didn't want me to be there (I was on the road not their property). They kept telling me that I was probably just there to rob them blind (I have to, somewhat, dress up for the salon I work at, so I'm fairly certain I did not look like a burglar). In the middle of that a couple rednecks pulled over in a beat up pick up to let me know that if they had their other truck they could get me back on the road. After they left I spent another hour working on it but, ultimately, couldn't get it going. Got really nauseas and dehydrated as it was 85f with the sun beating down on me. Then the same two guys came back and offered to put my bike in the bed of the truck and take me to a shop, but they told me that I had to ride in the bed with the bike. I agreed. They didn't have any tiedowns so we put the kickstand down and I did my best to hold it up but I failed as it fell on me twice. After that a cop decided to pull us over as Michigan is a seatbelt state and I was in the bed. Turns out the passenger in the truck had a warrant (note: I'm already 2 hours late for work and forgot my phone). This ended up delaying me another hour or so. The cop was actually kind of nice and understood my predicament so he let us go and decided to ignore that I was continuing to (attempt) to hold my bike up.
Click to expand...

Joined Apr 12, 2008
·
4,278 Posts
Nothing too serious here. I had a 73 Triumph who's electrical system gave up on me. I was within a few miles of home so my wife came and got me with the pick up. My very first bike, a 77GS400, had a fuel issue. I had to walk back to campus, get my old Honda Civic and a friend and I crammed it in the back and drove it home. Everything else has been minor - broken clutch cables, melted stator connectors - things I can fix on the side of the road.
► Show Full Signature
Caution: Mechanical advice given early in the morning may be pre-coffee. Follow at your own risk.

A legend in his own mind

Joined May 19, 2010
·
2,600 Posts
Thank God the only problem I've had to date was a flat tire. Just a couple blocks from the bad part of town, no cell phone and the people I would call are out of any service area anyway. Couple cans of over priced fix-a-flat (tube tires so I'm praying) I had to stop at every gas station on the way home for air, got to the edge of town, so I fill tire one last time and haul a$$ for home. As long as I'm at speed (straight road highway) I'm good-ish. I know it wasn't the safe thing to do but I was really out of options other than sit in a party store parking lot till God knows when. It was about 20 miles to home from last air stop, thankfully it was straight back country road all the way.

Joined Apr 14, 2012
·
503 Posts
In 1977 I road a brand new Sportster to Florida from Kentucky and on the way back I broke down in Athens Georgia on the interstate. I was slowing down like I was out of gas. I was pulling of the interstate on an off ramp towards a gas station when it just died and wouldn't start. I notice a white van grossing of the interstate to the gas station. He turned around and proceeded to come down the off ramp the wrong way. I told him what happened and said that I had just got gas so it couldn't be low yet. He took the points cover off and find the problem right off. There was suppose to be a plastic tab that followed the came but it broke off. Lucky for me that guy knew what he was doing. This was on a Sunday so no Harley dealership was opened. So I climbed into the van and since I had stayed up all night he told me just to go to sleep. He went and picked up a friend of his who worked at the local Harley dealership and opened it up. They got a new set of points and installed them for me. They saved my bacon so I gave them the last of my Mexican tobacco and address. I invited them to see me if they ever came through my town. But never heard from them again. I would like think them for every thing they did. You meet the greatest people on motorcycles.
1 - 6 of 6 Posts
Join the discussion
Continue with Facebook
Continue with Google
or sign up with email
About this Discussion
5 Replies
6 Participants
Last post:
Johnnystriple Sep 6, 2014
Motorcycle Forum
A forum community discussing all bikes from Harley Davidson to Honda, Suzuki, KTM, Yamaha, and BMW. Come join the discussion about performance modifications, troubleshooting, maintenance, and more!
Full Forum Listing
Explore Our Forums
General Motorcycle Discussion Off Topic Motorcycle Repair Honda Vintage Forum
Popular Communities